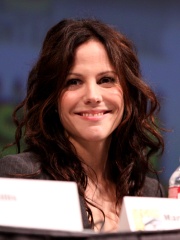 Mary-Louise Parker (born August 2, 1964) is an American actress. After making her Broadway debut as Rita in Craig Lucas' Prelude to a Kiss in 1990 (for which she received a Tony Award nomination), Parker came to prominence for film roles in Grand Canyon (1991), Fried Green Tomatoes (1991), The Client (1994), Bullets over Broadway (1994), A Place for Annie (1994), Boys on the Side (1995), The Portrait of a Lady (1996), and The Maker (1997). Among stage and independent film appearances thereafter, Parker received the 2001 Tony Award for Best Actress in a Play for her portrayal of Catherine Llewellyn in David Auburn's Proof, among other accolades. Read more on Wikipedia