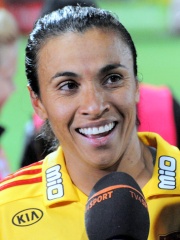 Marta Vieira da Silva (born 19 February 1986), commonly known as Marta ([ˈmaɾtɐ]), is a Brazilian footballer with both Brazilian and Swedish citizenship. She plays for the Orlando Pride in the National Women's Soccer League and the Brazil national team as a forward. She holds the record for most goals in Brazilian International Football, male or female, with 112 goals for her country. Read more on Wikipedia

Page views of Martas by language

Among soccer players, Marta ranks 2,609 out of 16,923. Before her are Rafinha, Mimis Domazos, Luisão, Rubén Pagnanini, Marco Delvecchio, and Mido. After her are Tihomir Ognjanov, Roberto Anzolin, Alberto Zozaya, Sam Allardyce, Ian Wright, and Eugen Meier.