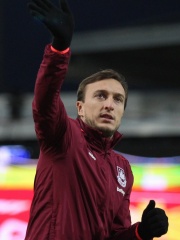 Mark James Noble (born 8 May 1987) is an English former professional footballer who played as a central midfielder and is well remembered for his time at English club West Ham United, spending eighteen years with the club. Apart from two short loan spells at Hull City and Ipswich Town in 2006, he played all of his first team football for the Hammers, which earned him the nickname "Mr West Ham".Noble played more Premier League games for West Ham than any other player, in addition to being the longest serving player in their squad at the end of his time with the club having been in the first team since 2004. He won the club's Hammer of the Year trophy twice, as well as being voted Hammer of the Decade at the end of the 2010s. Read more on Wikipedia