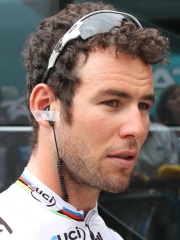 Mark Simon Cavendish (born 21 May 1985) is a Manx professional road racing cyclist, who currently rides for UCI WorldTeam Deceuninck–Quick-Step. As a track cyclist he specialises in the madison, points race, and scratch race disciplines; as a road racer he is a sprinter. He is considered one of the greatest road sprinters of all time, but is also known for his aggressive riding style that has led to various incidents.In his first years as an elite track rider, Cavendish won gold in the madison at the 2005 and 2008 UCI Track Cycling World Championships riding for Great Britain, with Rob Hayles and Bradley Wiggins respectively, and in the scratch race at the 2006 Commonwealth Games riding for Isle of Man. Read more on Wikipedia

In Isle of Man

Others born in Isle of Man

Among CYCLISTS In Isle of Man

Among cyclists born in Isle of Man, Mark Cavendish ranks 1. After him are Peter Kennaugh (1989).