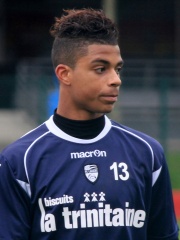 Mario René Junior Lemina (French pronunciation: ​[maʁjo ləmina]; born 1 September 1993) is a Gabonese professional footballer who plays as a central midfielder for Galatasaray on loan from Premier League club Southampton and the Gabon national team. He played for French sides Lorient and Marseille, before joining Italian side Juventus in 2015, where he won the domestic double in both of his seasons with the club. Read more on Wikipedia

Since 2007, the English Wikipedia page of Mario Lemina has received more than 1,072,903 page views. His biography is available in 36 different languages on Wikipedia making him the 4,975th most popular soccer player.

Among soccer players, Mario Lemina ranks 4,971 out of 13,233. Before him are Andrea Dossena, Nelson Tapia, Hugo Ibarra, Gaizka Garitano, An Yong-hak, and Yann M'Vila. After him are Ahmed Elmohamady, Pizzi, Carlos Mayor, Ovidiu Stîngă, Mattias Jonson, and Takao Orii.