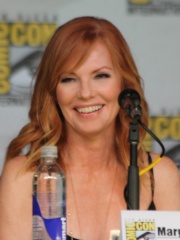 Mary Margaret Helgenberger (born November 16, 1958) is an American actress. She began her career in the early 1980s and first came to attention for playing the role of Siobhan Ryan on the daytime soap opera Ryan's Hope from 1982 to 1986. She is best known for her roles as Catherine Willows in the CBS police procedural drama CSI: Crime Scene Investigation (2000–13) and the subsequent TV movie Immortality (2015) and as K.C. Read more on Wikipedia

Since 2007, the English Wikipedia page of Marg Helgenberger has received more than 2,535,521 page views. Her biography is available in 32 different languages on Wikipedia making her the 1,461st most popular actor.