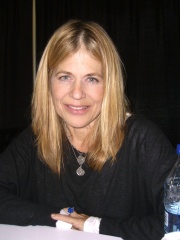 Linda Carroll Hamilton (born September 26, 1956) is an American actress. She is best known for her portrayal of Sarah Connor in the Terminator film series and Catherine Chandler in the television series Beauty and the Beast (1987–1990), for which she was nominated for two Golden Globe Awards and an Emmy Award. She also starred as Vicky Baxter in the horror film Children of the Corn (1984), Doctor Amy Franklin in the monster film King Kong Lives (1986), and Mayor Rachel Wando in the disaster thriller film Dante's Peak (1997). Read more on Wikipedia

Linda Hamilton is most famous for playing Sarah Connor in the Terminator movies.