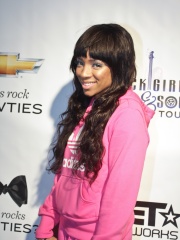 Niatia Jessica Kirkland (born October 4, 1989), better known by her stage name Lil Mama, is an American rapper, singer, actress and television personality from Brooklyn, New York and Harlem, New York. She experienced top 10 Billboard placements at seventeen with her debut album VYP (Voice of the Young People) which debuted at #25 on the Billboard 200. The album spawned her four major singles including her staple song and dance anthem "Lip Gloss", earning her two Teen Choice Awards and Monster Single of the Year nominations at the MTV VMA's. Read more on Wikipedia

Among singers, Lil Mama ranks 3,472 out of 3,541. Before her are Malin Reitan, Jeremih, PartyNextDoor, Diane Birch, Brendan Murray, and Dayana Kirillova. After her are Jasmine V, Lights, Carly Patterson, Amber Bondin, Martin Vučić, and Mike Will Made It.