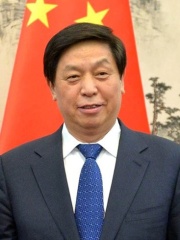 Li Zhanshu (born August 30, 1950) (Chinese: 栗战书; pinyin: Lì Zhànshū) is a Chinese politician, and the current Chairman of the Standing Committee of the National People's Congress, head of the People's Republic of China's top legislative body. He is a No.3 member of the Politburo Standing Committee of the Chinese Communist Party, China's top decision-making body.Li began his political career in rural regions of his native Hebei province, methodically rising through the ranks as the Communist Party Secretary of Xi'an, Governor of Heilongjiang province, and the Party Secretary of Guizhou province. In 2012, he was transferred to become chief of the General Office of the Communist Party of China. Read more on Wikipedia