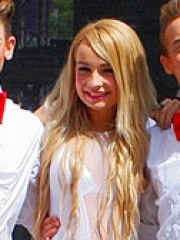 Kim Petras (; born 27 August 1992) is a German singer and songwriter based in Los Angeles, California. Between 2016 and 2020, she released music as an independent artist under her own imprint, BunHead Records, before signing with Amigo and Republic Records in 2021.Petras began recording music as a teenager, releasing her debut extended play One Piece of Tape in 2011. She independently released her debut international single in 2017, "I Don't Want It at All", which went on to top several viral music charts on Spotify. Read more on Wikipedia

Among singers, Kim Petras ranks 2,859 out of 3,528. Before her are Preslava, Marta Roure, Tionne Watkins, Brandon Boyd, Lars Frederiksen, and Glukoza. After her are Gabriella Cilmi, Marlon Roudette, Eunha, Jun Hyo-seong, Kotoko, and Ledina Çelo.