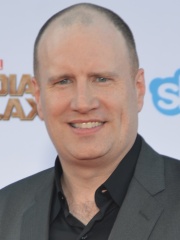 Kevin Feige ( FY-ghee; born June 2, 1973) is an American film and television producer who has been the president of Marvel Studios since 2007. The films he has produced have a combined worldwide box office gross of over $26.8 billion.Feige is a member of the Producers Guild of America. In 2019, he was nominated for the Academy Award for Best Picture for producing Black Panther, the first superhero film ever to receive a Best Picture nomination, as well as the first film in the Marvel Cinematic Universe to win an Academy Award, marking it the first time Feige was nominated for an Academy Award, and in October 2019 he became chief creative officer of Marvel Entertainment. Read more on Wikipedia

Since 2007, the English Wikipedia page of Kevin Feige has received more than 3,331,581 page views. His biography is available in 36 different languages on Wikipedia making him the 33rd most popular producer.