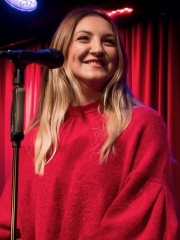 Julia Carin Cavazos (born November 13, 1993), known professionally as Julia Michaels, is an American singer and songwriter. Born in Iowa and raised in California, Michaels began her career writing for other artists. Following her success as a writer, she released her debut single with Republic Records in 2017, "Issues", which peaked at number 11 on the Billboard Hot 100 in the United States and was certified quintuple-platinum by the Recording Industry Association of America (RIAA). Read more on Wikipedia

Among singers, Julia Michaels ranks 3,056 out of 3,541. Before her are Leo, Danny O'Donoghue, Terje Bakken, Roxen, Filipa Sousa, and Monica. After her are Jessie Ware, May J., David Archuleta, Jhené Aiko, Laura Rizzotto, and Bertine Zetlitz.