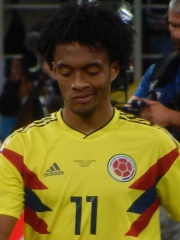 Juan Guillermo Cuadrado Bello (born 26 May 1988) is a Colombian professional footballer who plays for Serie A club Juventus and the Colombia national team. He is known for his direct style of play, including his pace (both on and off the ball) as well as his dribbling skills. He started off in a central midfield role, acting as a defensive midfielder early in his career, also being used as a forward on occasion, before being moved into as a wider positions in which he now usually plays, often operating as a right-sided winger, attacking midfielder, full-back or wing-back.Having begun his career at Independiente Medellín, Cuadrado moved to Italy in 2009 to join Udinese. Read more on Wikipedia