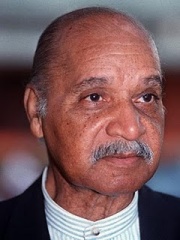 José Craveirinha (28 May 1922 - 6 February 2003) was a Mozambican journalist, story writer and poet, who is today considered the greatest poet of Mozambique. His poems, written in Portuguese, address such issues as racism and the Portuguese colonial domination of Mozambique. A supporter of the anti-Portuguese group FRELIMO during the colonial wars, he was imprisoned in the 1960s. Read more on Wikipedia

Since 2007, the English Wikipedia page of José Craveirinha has received more than 33,649 page views. His biography is available in 15 different languages on Wikipedia making him the 3,906th most popular writer.

Among WRITERS In Mozambique

Among writers born in Mozambique, José Craveirinha ranks 2. Before him are Mia Couto (1955).