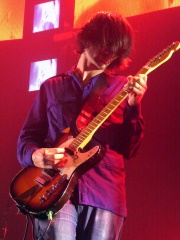 Jonathan Richard Guy Greenwood (born 5 November 1971) is an English musician and composer. He is the lead guitarist and keyboardist of the alternative rock band Radiohead, and has written a number of film scores. Along with his elder brother, Radiohead bassist Colin, Greenwood attended Abingdon School in Abingdon near Oxford, England, where he met the future band members. Read more on Wikipedia

Since 2007, the English Wikipedia page of Jonny Greenwood has received more than 1,879,845 page views. His biography is available in 32 different languages on Wikipedia making him the 1,388th most popular musician.

Among musicians, Jonny Greenwood ranks 1,391 out of 2,258. Before him are Will.i.am, Mel Tormé, Gotye, Brad Whitford, Devin Townsend, and Butch Vig. After him are Erykah Badu, Eliane Elias, Mahmood, John Patitucci, Gilby Clarke, and Stanley Turrentine.