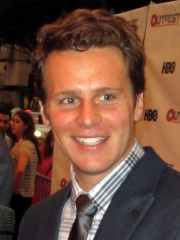 Jonathan Drew Groff (born March 26, 1985) is an American actor and singer. Known for his performances on screen, stage and television, Groff is the recipient of such accolades as a Grammy Award and has been nominated for two Tony Awards, two Drama League Awards, a Drama Desk Award and a Primetime Emmy Award. Groff rose to prominence in 2006 for his portrayal of Melchior Gabor in the original Broadway production of Spring Awakening, for which he received widespread acclaim and a nomination for the Tony Award for Best Actor in a Musical, becoming one of the youngest nominees for the award, at age 21. Read more on Wikipedia