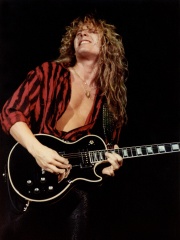 John Sykes (born 29 July 1959) is an English musician and songwriter, best known as a member of Whitesnake, Thin Lizzy and Tygers of Pan Tang. He also fronted the hard rock group Blue Murder, and has released several solo albums. Following a stint in the heavy metal group Tygers of Pan Tang in the early 1980s, Sykes joined the Irish hard rock group Thin Lizzy for their 1983 album Thunder and Lightining. Read more on Wikipedia

Since 2007, the English Wikipedia page of John Sykes has received more than 613,199 page views. His biography is available in 17 different languages on Wikipedia making him the 1,330th most popular musician.