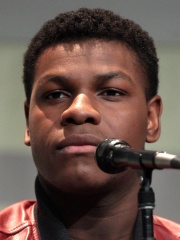 John Adedayo Bamidele Adegboyega (born 17 March 1992), known professionally as John Boyega, is a British-Nigerian actor and producer. He first rose to prominence in his native Britain for his role as Moses in the sci-fi comedy film Attack the Block (2011), and his international breakthrough came with his role as Finn in the Star Wars sequel trilogy films The Force Awakens (2015), The Last Jedi (2017), and The Rise of Skywalker (2019). His other credits include the drama film Imperial Dreams (2014), the historical drama film Detroit (2017), the science fiction film Pacific Rim: Uprising (2018), and four episodes of the television series 24: Live Another Day. Read more on Wikipedia