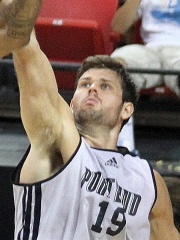 Joel Daniel Freeland (born 7 February 1987) is a British former professional basketball player who last played for CSKA Moscow of the VTB United League. Standing at 2.10 m (6 ft 10 1⁄2 in), he played at the power forward and center positions. Read more on Wikipedia

Since 2007, the English Wikipedia page of Joel Freeland has received more than 179,190 page views. Her biography is available in 16 different languages on Wikipedia making her the 867th most popular basketball player.