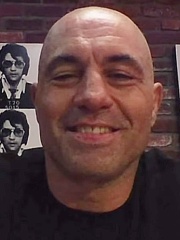 Joseph James Rogan (born August 11, 1967) is an American comedian, podcast host, and mixed martial arts color commentator. He has also worked as a television host and an actor. Rogan began his career in comedy in August 1988 in the Boston area. Read more on Wikipedia

Since 2007, the English Wikipedia page of Joe Rogan has received more than 13,819,699 page views. His biography is available in 23 different languages on Wikipedia making him the 5,624th most popular actor.