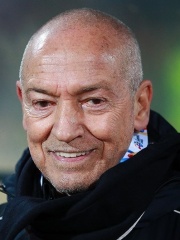 Manuel Jesualdo Ferreira (born 24 May 1946) is a Portuguese football manager, currently in charge of Boavista. In a managerial career of forty years, he was in charge of all of his country's Big Three and had his greatest successes at Porto, where he became the first manager to win three consecutive Primeira Liga titles and also lifted the Taça de Portugal twice. Read more on Wikipedia

Among politicians, Jesualdo Ferreira ranks 8,314 out of 15,710. Before him are Christoph Blocher, Hubert Pierlot, Seocheon of Goguryeo, Agesipolis III, András Hegedüs, and Neferkahor. After him are Amaury de Montfort, Osvaldo Cavandoli, Abbas al-Musawi, Abdallah al-Adil, King Xiao of Zhou, and Khaltmaagiin Battulga.