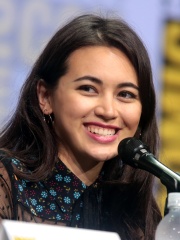 Jessica Yu Li Henwick (李玉; born 30 August 1992) is an English actress. She is the first actress of East Asian descent to play the lead role in a British television series, having starred in the children's show Spirit Warriors (2010). She is also known for her roles as Nymeria Sand in HBO series Game of Thrones (2015–2017), X-wing pilot Jessika Pava in Star Wars: The Force Awakens (2015) and the character Colleen Wing in Iron Fist (2017–2018), The Defenders (2017) and the second season of Luke Cage (2018). Read more on Wikipedia

Since 2007, the English Wikipedia page of Jessica Henwick has received more than 4,088,433 page views. Her biography is available in 17 different languages on Wikipedia making her the 8,167th most popular actor.