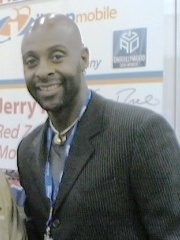 Jerry Lee Rice Sr. (born October 13, 1962) is an American former professional football player who was a wide receiver in the National Football League (NFL), primarily with the San Francisco 49ers. Due to his numerous records, accomplishments, and accolades, he is widely regarded as the greatest wide receiver in NFL history, and one of the greatest players in NFL history.Rice is the career leader in most major statistical categories for wide receivers, including receptions, touchdown receptions, and receiving yards, once being the leader for total yards and touchdowns in a season. Read more on Wikipedia

Since 2007, the English Wikipedia page of Jerry Rice has received more than 4,950,494 page views. His biography is available in 24 different languages on Wikipedia making him the 11th most popular american football player.