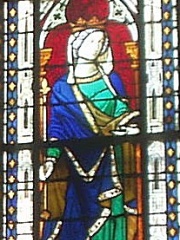 Jeanne d'Évreux (1310 – 4 March 1371) was Queen of France and Navarre as the third wife of King Charles IV of France. She was the daughter of his uncle Louis, Count of Évreux and Margaret of Artois. Their lack of sons caused the end of the direct line of the Capetian dynasty. Because she was his first cousin, the couple required papal permission to marry from Pope John XXII. Read more on Wikipedia

Since 2007, the English Wikipedia page of Jeanne d'Évreux has received more than 58,217 page views. Her biography is available in 26 different languages on Wikipedia making her the 259th most popular companion.

Among companions, Jeanne d'Évreux ranks 260 out of 586. Before her are Juana Enríquez, Charles I, Duke of Bourbon, Bertha of Holland, Alexandra of Yugoslavia, Princess Victoria of Hesse and by Rhine, and Hildegard of the Vinzgau. After her are Domitia Longina, Karin Månsdotter, Olivera Despina, Marie of Brabant, Queen of France, Princess Clémentine of Orléans, and Adelaide of Austria.

Among people born in 1310, Jeanne d'Évreux ranks 4. Before her are Pope Urban V, Casimir III the Great, and Viracocha Inca. After her are Frederick II, Margrave of Meissen, Berdi Beg, Andronikos III of Trebizond, Gil Álvarez Carrillo de Albornoz, Jean de Roquetaillade, Juan Fernández de Heredia, Thomas Preljubović, and Henry of Grosmont, 1st Duke of Lancaster. Among people deceased in 1371, Jeanne d'Évreux ranks 3. Before her are David II of Scotland and Stefan Uroš V. After her are Vukašin of Serbia, Simeon Uroš, Ivan Alexander of Bulgaria, and Ubayd Zakani.