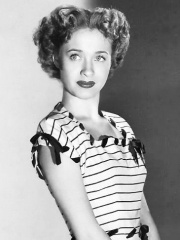 Jane Powell (born Suzanne Lorraine Burce; April 1, 1929) is an American singer, dancer and actress who rose to fame in the mid-1940s with roles in various Metro-Goldwyn-Mayer musicals. Powell was born and raised in Portland, Oregon, where she achieved local fame as a singer, touring the state as the Oregon Victory Girl selling victory bonds. As a teenager, she relocated to Los Angeles, California, where she signed a contract with Metro-Goldwyn-Mayer. Read more on Wikipedia

Since 2007, the English Wikipedia page of Jane Powell has received more than 1,521,783 page views. Her biography is available in 22 different languages on Wikipedia making her the 4,381st most popular actor.