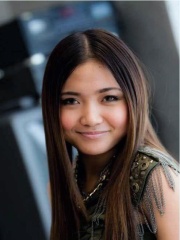 Jake Zyrus (born May 10, 1992; formerly performed under the mononym Charice and was also known as Charice Pempengco) is a Filipino singer and television personality.In 2007, after some appearances on Philippine television, Zyrus sang on The Ellen DeGeneres Show, and the following year, he made several international television appearances, including on The Oprah Winfrey Show. He then began performing in concerts with David Foster and Andrea Bocelli, among others. Zyrus released the studio album Charice in 2010; it entered the Billboard 200 at number eight, making it the first album of an Asian solo singer ever to land in the Top 10. Read more on Wikipedia

Since 2007, the English Wikipedia page of Jake Zyrus has received more than 1,276,573 page views. Her biography is available in 43 different languages on Wikipedia making her the 1,896th most popular singer.

Among SINGERS In Philippines