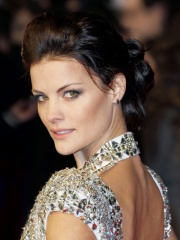 Jaimie Lauren Alexander (born Jaimie Lauren Tarbush; March 12, 1984) is an American actress. She is known for portraying Jessi on the TV series Kyle XY and Sif in the 2011 superhero film Thor, and its 2013 sequel. Read more on Wikipedia

Since 2007, the English Wikipedia page of Jaimie Alexander has received more than 5,617,720 page views. Her biography is available in 37 different languages on Wikipedia making her the 3,552nd most popular actor.

Among actors, Jaimie Alexander ranks 3,526 out of 8,832. Before her are Rinko Kikuchi, Henry B. Walthall, Madeline Kahn, Kurt Fuller, Brett Cullen, and Jessica Walter. After her are Chris Farley, Gilbert Roland, Béatrice Dalle, Bill Nunn, Otto Waalkes, and Zero Mostel.