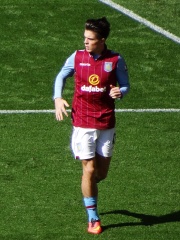 Jack Peter Grealish (born 10 September 1995) is an English professional footballer who plays as a winger or attacking midfielder for Premier League club Aston Villa and the England national team. Grealish joined Aston Villa at the age of six, and made his debut for the club in May 2014, following a loan at Notts County. Eligible to represent either England or the Republic of Ireland internationally, Grealish was capped by the Republic of Ireland up to under-21 level before confirming his decision to play for England in April 2016. Read more on Wikipedia

This Is Anfield
Jack Grealish on how Jordan Henderson helped him “mature as a captain”
"It's changed me on and off the pitch."
Jack Lusby
Daily Mail
Harry Maguire, Jordan Henderson and Jack Grealish return to England training
All the players who didn't start were in training apart from Dean Henderson, with the goalkeeper carrying a slight niggle and missing his second session in a week ahead of the Scotland game.
Alex Bowmer
Daily Mail
BRYAN ROBSON: I'd love to see Jack Grealish at Man United and here's why he must start for England
BRYAN ROBSON EXCLUSIVE: I can see the comparisons with Paul Gascoigne who was a phenomenal talent and now Grealish has the platform to show what he can do.
Bryan Robson
Daily Mail
Gareth Southgate set to DROP Jack Grealish and play a back four with Kieran Trippier at left back
Jack Grealish is set to be dropped from the starting line-up for England's Euro 2020 opener against Croatia today while Gareth Southgate is set to start Kieran Trippier over Ben Chilwell and Luke Shaw.
Kieran Lynch, Sami Mokbel