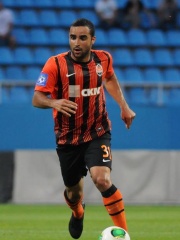 Ismaily Gonçalves dos Santos (born 11 January 1990), known simply as Ismaily, is a Brazilian professional footballer who plays for Ukrainian club FC Shakhtar Donetsk as a left back. After starting out at Ivinhema, and three and a half seasons in Portugal with three clubs, he went on to spend most of his career with Shakhtar Donetsk in the Ukrainian Premier League, winning several titles. Read more on Wikipedia

Since 2007, the English Wikipedia page of Ismaily has received more than 25,772 page views. His biography is available in 20 different languages on Wikipedia (up from 18 in 2019). Ismaily is the 6,984th most popular soccer player (down from 5,719th in 2019), the 1,056th most popular biography from Brazil and the 642nd most popular Brazilian Soccer Player.

Page views of Ismailies by language