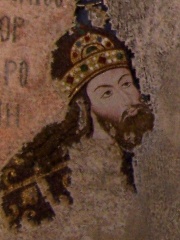 Isaac Komnenos or Comnenus (Greek: Ἰσαάκιος Κομνηνός, romanized: Isaakios Komnēnos; 16 January 1093 – after 1152) was the third son of Byzantine Emperor Alexios I Komnenos and Empress Irene Doukaina. He was raised to the high rank of sebastokrator by his older brother John II Komnenos in reward for his support, but they later fell out, as Isaac began to covet the throne. In 1130, Isaac and his sons fled to exile after becoming involved in a conspiracy against John. Read more on Wikipedia

Among politicians, Isaac Komnenos ranks 7,412 out of 15,710. Before him are Shams Pahlavi, Leszek II the Black, Tudor Vladimirescu, Elisabetta Gonzaga, Arturo Frondizi, and Kashyapa. After him are Bagrat IV of Georgia, Momčilo Krajišnik, Ebrahim Afshar, Spytihněv II, Duke of Bohemia, Félix Tshisekedi, and Landgravine Charlotte of Hesse-Kassel.