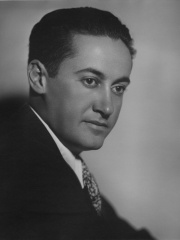 Irving Grant Thalberg (May 30, 1899 – September 14, 1936) was an American film producer during the early years of motion pictures. He was called "The Boy Wonder" for his youth and ability to select scripts, choose actors, gather production staff, and make profitable films, including Grand Hotel, China Seas, Camille, Mutiny on the Bounty and The Good Earth. His films carved out an international market, "projecting a seductive image of American life brimming with vitality and rooted in democracy and personal freedom", states biographer Roland Flamini.He was born in Brooklyn, New York, and as a child was afflicted with a congenital heart disease that doctors said would kill him before he reached the age of thirty. Read more on Wikipedia

Since 2007, the English Wikipedia page of Irving Thalberg has received more than 761,553 page views. His biography is available in 38 different languages on Wikipedia making him the 21st most popular producer.