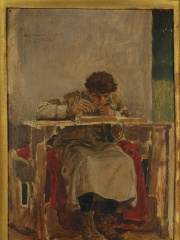 Irnerius (c. 1050 – after 1125), sometimes referred to as lucerna juris ("lantern of the law"), was an Italian jurist, and founder of the School of Glossators and thus of the tradition of Medieval Roman Law. He taught the newly recovered Roman lawcode of Justinian I, the Corpus Juris Civilis, among the liberal arts at the University of Bologna, his native city. Read more on Wikipedia

Since 2007, the English Wikipedia page of Irnerius has received more than 59,895 page views. His biography is available in 17 different languages on Wikipedia (up from 16 in 2019). Irnerius is the 22nd most popular lawyer (down from 20th in 2019), the 1,536th most popular biography from Italy and the most popular Italian Lawyer.

Page views of Irneriuses by language

Among people born in 1050, Irnerius ranks 12. Before him are Roscellinus, Olaf III of Norway, Walter Sans Avoir, Frederick I, Duke of Swabia, Halsten Stenkilsson, and Sviatopolk II of Kiev. After him are Amadeus II, Count of Savoy, Leopold II, Margrave of Austria, Olaf I of Denmark, Muhammad I of Khwarazm, Ingvar the Far-Travelled, and Li Tang. Among people deceased in 1140, Irnerius ranks 1. After him are Soběslav I, Duke of Bohemia, Leo I, Prince of Armenia, and William of Malmesbury.

Among LAWYERS In Italy