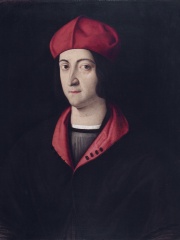 Ippolito (I) d'Este (Hungarian: Estei Hippolit; 20 March 1479 – 3 September 1520) was an Italian Roman Catholic cardinal, and Archbishop of Esztergom. He was a member of the ducal House of Este of Ferrara, and was usually referred to as the Cardinal of Ferrara. Though a bishop of five separate dioceses, he was never consecrated a bishop. Read more on Wikipedia

Among religious figures, Ippolito d'Este ranks 1,511 out of 2,238. Before him are Wiborada, Antonio Quarracino, Tlacaelel, Jehoiada, Yijing, and Lawrence Justinian. After him are Federico Borromeo, Nicolaus Olahus, Zadok, Dagobert of Pisa, Plutarch of Byzantium, and Willibald.

Among people born in 1479, Ippolito d'Este ranks 10. Before him are Vasili III of Russia, Giuliano de' Medici, Duke of Nemours, Diego Columbus, Peter Henlein, Guru Amar Das, and Francisco de Montejo. After him are Vallabha and Catherine of York. Among people deceased in 1520, Ippolito d'Este ranks 12. Before him are Pier Gerlofs Donia, Cuitláhuac, Kunigunde of Austria, Sten Sture the Younger, Agostino Chigi, and Jo Gwang-jo. After him is William Dunbar.