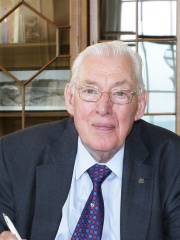 Ian Richard Kyle Paisley, Baron Bannside (6 April 1926 – 12 September 2014) was a Northern Irish loyalist politician and Protestant religious leader who served as leader of the Democratic Unionist Party (DUP) from 1971 to 2008 and First Minister of Northern Ireland from 2007 to 2008. He became a Protestant evangelical minister in 1946 and remained one for the rest of his life. In 1951 he co-founded the fundamentalist Free Presbyterian Church of Ulster and was its leader until 2008. Read more on Wikipedia

Among politicians, Ian Paisley ranks 10,368 out of 15,710. Before him are Oscar Torp, Albert Pintat, Ashikaga Yoshizumi, Richard Ratsimandrava, King Lie of Zhou, and Marcus Valerius Volusus. After him are John Boland, Jorge Pacheco Areco, Sanghamitta, Abdyl Frashëri, Matthew Hopkins, and Augusto B. Leguía.