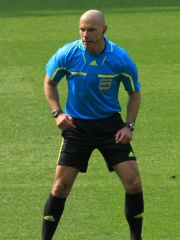 Howard Melton Webb MBE (born 14 July 1971) is an English former professional football referee who officiated primarily in the Premier League from 2003 to 2014, as well as for FIFA as a FIFA international referee from 2005 to 2014. Webb is counted amongst the all-time top referees by the International Federation of Football History and Statistics and refereed a number of notable matches in England including the FA Cup final, the FA Community Shield and the final of the League Cup. In 2010, he became the first person to referee the finals of both the UEFA Champions League and FIFA World Cup in the same year.Throughout his professional career, Webb drew praise for his authoritative and respected approach to refereeing from football bodies, pundits, colleagues, players and managers. Read more on Wikipedia

Most Popular Referees in Wikipedia

Among REFEREES In United Kingdom