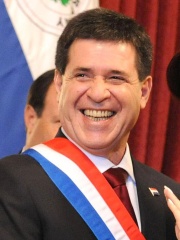 Horacio Manuel Cartes Jara OSC (born 5 July 1956) is a Paraguayan businessman and politician who served as the president of Paraguay from 2013 to 2018. He is a member of the Colorado Party. Cartes owns about two dozen businesses in his Grupo Cartes conglomerate including tobacco, soft drinks, meat production, and banking. Read more on Wikipedia

Among politicians, Horacio Cartes ranks 8,463 out of 15,710. Before him are Peljidiin Genden, Muhammad ibn Tughj al-Ikhshid, Ronald Lauder, Eutharic, Marcus Valerius Laevinus, and Norbert Blüm. After him are Alexander Shelepin, Ernest, Count of Lippe-Biesterfeld, King An of Zhou, Archduke Rainer Ferdinand of Austria, Gebre Mesqel Lalibela, and Prince George William of Hesse-Darmstadt.

Among POLITICIANS In Paraguay