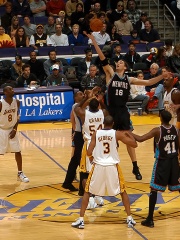 Horace Junior Grant (born July 4, 1965) is an American retired basketball player. He attended and played college basketball at Clemson University before playing professionally in the National Basketball Association (NBA), where he became a four-time champion with the Chicago Bulls and Los Angeles Lakers. Read more on Wikipedia

Since 2007, the English Wikipedia page of Horace Grant has received more than 2,345,124 page views. His biography is available in 22 different languages on Wikipedia making him the 179th most popular basketball player.