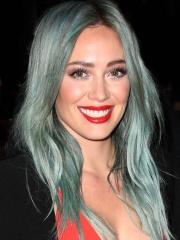 Hilary Erhard Duff (born September 28, 1987) is an American actress, businesswoman, singer-songwriter, producer, and writer. Duff began her acting career at a young age and quickly became labeled a teen idol as the title character of the television series Lizzie McGuire (2001–2004) and in the theatrical film based on the series, The Lizzie McGuire Movie (2003). Thereafter, she appeared in numerous films, with leading roles in Agent Cody Banks (2003), Cheaper by the Dozen (2003), A Cinderella Story (2004), and Cheaper by the Dozen 2 (2005). Read more on Wikipedia

Since 2007, the English Wikipedia page of Hilary Duff has received more than 12,819,483 page views. Her biography is available in 74 different languages on Wikipedia making her the 2,769th most popular actor.