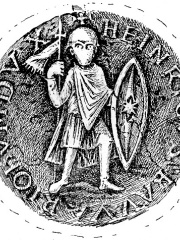 Henry VII (died 16 October 1047) was the count of Luxembourg (as Henry II) from 1026 and duke of Bavaria from 1042 until his death. He was a son of Frederick of Luxembourg, count of Moselgau, and possibly Ermentrude of Gleiberg. In 1026, he inherited Luxembourg from his uncle Henry I. This included charge of the abbeys of Saint-Maximin in Trier and Saint-Willibrord in Echternach. Read more on Wikipedia

Page views of Henry VII, Duke of Bavarias by language

Among politicians, Henry VII, Duke of Bavaria ranks 6,608 out of 15,710. Before him are Sergei Bagapsh, Jānis K. Bērziņš, Aretas III, Masaniello, Salome I, and Frederick IV, Duke of Swabia. After him are Costas Simitis, Frederick William, Duke of Brunswick-Wolfenbüttel, Guru Tegh Bahadur, Guttorm of Norway, George II, Landgrave of Hesse-Darmstadt, and Jacob Stainer.