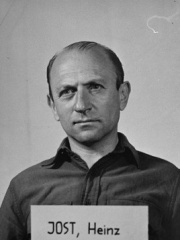 Heinz Jost (9 July 1904 – 12 November 1964) was a German SS functionary during the Nazi era. He was involved in espionage matters as the Sicherheitsdienst (Security Service) or (SD) section chief of office VI (foreign intelligence) of the Reich Security Main Office. Jost was responsible for genocide in eastern Europe as commander of Einsatzgruppe A from March–September 1942. After Germany's defeat, Jost was tried and convicted by a U.S. Read more on Wikipedia

Among politicians, Heinz Jost ranks 6,955 out of 15,577. Before him are Mekh, Sophia Eleonore of Saxony, Nicholas Murray Butler, Augustus, Grand Duke of Oldenburg, Bernhard III, Duke of Saxe-Meiningen, and Henry McMahon. After him are Richard de Bures, George Frederick, Margrave of Brandenburg-Ansbach, Anton Korošec, Hannelore Kohl, Regalianus, and Archduke Alexander Leopold of Austria.