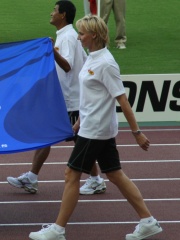 Heike Gabriela Drechsler (German pronunciation: [ˈhaɪkə ɡabʁiˈeːlaː ˈdʁɛkslɐ]; née Daute; born 16 December 1964) is a German former track and field athlete who represented East Germany and later Germany. One of the most successful long jumpers of all-time, she is a former world record holder and ranks third on the all-time list with her legal best of 7.48 metres in 1988. Her marginally wind-assisted jump of 7.63 metres (+2.1) in 1992 at altitude in Sestriere, is still the furthest a woman has ever long jumped. Read more on Wikipedia

Since 2007, the English Wikipedia page of Heike Drechsler has received more than 183,368 page views. Her biography is available in 28 different languages on Wikipedia making her the 302nd most popular athlete.

Among ATHLETES In Germany