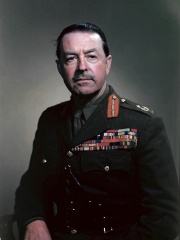 Field Marshal Harold Rupert Leofric George Alexander, 1st Earl Alexander of Tunis, (10 December 1891 – 16 June 1969), was a senior British Army officer who served with distinction in both the First and the Second World War and, afterwards, as Governor General of Canada and the first Lord Lieutenant of Greater London in 1965. Alexander was born in London to aristocratic parents and was educated at Harrow before moving on to the Royal Military College, Sandhurst, for training as an army officer of the Irish Guards. He rose to prominence through his service in the First World War, receiving numerous honours and decorations, and continued his military career through various British campaigns across Europe and Asia. Read more on Wikipedia

Harold Alexander, 1st Earl Alexander of Tunis was a British Army officer who commanded the Allied forces in North Africa during the Second World War. He was also the 18th Governor-General of Canada from 1952 to 1958.