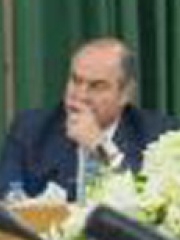 Hani Fawzi Mulki (also known as Hani Mulki; Arabic: هاني الملقي‎; Hāni Al-Mulki; born 15 October 1951) is a Jordanian politician that held several ministerial and diplomatic positions, and he was Chief Commissioner of the Aqaba Special Economic Zone Authority before his designation as Prime Minister by King Abdullah II and approval by the House of Representatives on 29 May 2016.Mulki served as Prime Minister until he submitted his resignation on 4 June 2018 after protests had swept the country because of his government's IMF-backed austerity measures that aimed to tackle Jordan's growing public debt. Read more on Wikipedia

Since 2007, the English Wikipedia page of Hani Mulki has received more than 37,404 page views. His biography is available in 17 different languages on Wikipedia. Hani Mulki is the 13,295th most popular politician (down from 12,469th in 2019), the 23rd most popular biography from Jordan and the 11th most popular Jordanian Politician.