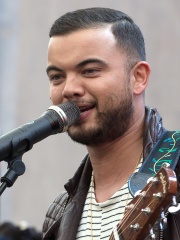 Guy Theodore Sebastian (born 26 October 1981) is an Australian singer and songwriter who was the winner of the first Australian Idol in 2003, and a judge on Australia's The X Factor in 2010, 2011, 2012, 2015 and 2016. He represented Australia at the 2015 Eurovision Song Contest, finishing in 5th place.Sebastian has released nine top ten albums, including three number ones. The first seven all gained either platinum or multi-platinum certification. Read more on Wikipedia

Among singers, Guy Sebastian ranks 2,779 out of 3,541. Before him are Lucía Pérez, Mia Rose, Jón Jósep Snæbjörnsson, Hovi Star, Monika Kuszyńska, and Carl Espen. After him are Esther Hart, Benjamin Kowalewicz, Daz Dillinger, Too Short, Sandie Jones, and Pusha T.

Among SINGERS In Malaysia