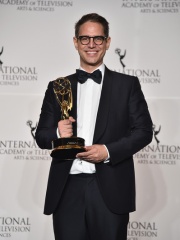 Gregory Berlanti (born May 24, 1972) is an American writer, producer and film director. He is known for his work on the television series Dawson's Creek, Brothers & Sisters, Everwood, Political Animals, Riverdale, Chilling Adventures of Sabrina and You, in addition to his contributions to DC Comics on film and television, including The CW's Arrowverse. In the 2017–2018 television season, Berlanti tied Jerry Bruckheimer's 2005–2006 record in having 10 different live-action scripted television series airing on various networks and digital platforms, and took sole possession of the record with 14 airing in the 2018–19 television season, having signed the most expensive producer deal to that date (June 2018) with Warner Bros. Read more on Wikipedia

Since 2007, the English Wikipedia page of Greg Berlanti has received more than 1,561,297 page views. His biography is available in 20 different languages on Wikipedia making him the 1,195th most popular film director.