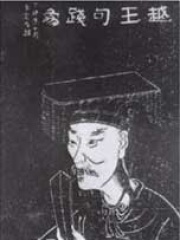 Goujian (Chinese: 勾踐) (reigned 496–465 BC) was the king of the Kingdom of Yue (present-day northern Zhejiang) near the end of the Spring and Autumn period. He was the son of King Yunchang. Goujian's reign coincided with arguably the last major conflict of the Spring and Autumn period, the struggle between Wu and Yue, wherein he eventually led his state to victory, annexing the rival. Read more on Wikipedia

Goujian was the King of Yue during the Spring and Autumn Period. He is most famous for his perseverance and determination in the face of adversity.

Page views of Goujians by language

Among politicians, Goujian ranks 3,131 out of 15,710. Before him are Mariano Rajoy, Emperor Suinin, Dalia Grybauskaitė, Emperor Qinzong, Catherine of Sweden, Countess Palatine of Kleeburg, and Anatoly Lunacharsky. After him are Bahram II, Gottlob Berger, Tomislav Nikolić, Henry II the Pious, John Foster Dulles, and Louis Alexandre, Count of Toulouse.

Among people born in 550 BC, Goujian ranks 10. Before him are Hecataeus of Miletus, Aristides, Ephialtes of Trachis, Mahākāśyapa, Haggai, and Atossa. After him are Kapila, Fuchai, Labashi-Marduk, Ariston of Sparta, Arsames, and Himilco.