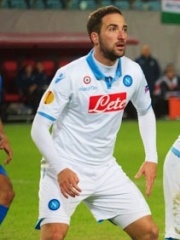 Gonzalo Gerardo Higuaín (Spanish pronunciation: [ɡonˈsalo iɣwaˈin], born 10 December 1987) is an Argentine professional footballer who plays as a striker for Serie A club Juventus. Nicknamed El Pipita or Pipa, as was his father Jorge, who was also a footballer, Gonzalo Higuaín was born in France, attaining Argentine citizenship in 2007, and now holds dual nationality. He started his career with Argentine club River Plate, before a transfer to Real Madrid in January 2007 for €12 million. Read more on Wikipedia

Since 2007, the English Wikipedia page of Gonzalo Higuaín has received more than 6,931,093 page views. His biography is available in 65 different languages on Wikipedia making him the 406th most popular soccer player.