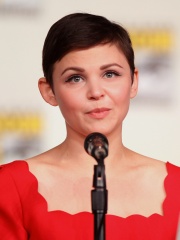 Jennifer Michelle "Ginnifer" Goodwin (born May 22, 1978) is an American actress. She is known for her starring role as Margene Heffman in the HBO drama series Big Love (2006–2011) and Snow White / Mary Margaret Blanchard in the ABC fantasy series Once Upon a Time (2011–2018). Goodwin has appeared in various films, including the drama Mona Lisa Smile (2003), the musical biopic Walk the Line (2005), the romantic comedy He's Just Not That into You (2009), the family comedy Ramona and Beezus (2010), the romantic comedy Something Borrowed (2011), and the biopic Killing Kennedy (2013). Read more on Wikipedia

Since 2007, the English Wikipedia page of Ginnifer Goodwin has received more than 7,584,087 page views. Her biography is available in 39 different languages on Wikipedia making her the 3,690th most popular actor.