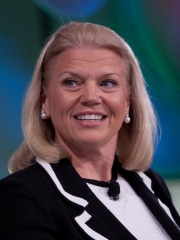 Virginia Marie "Ginni" Rometty (born July 29, 1957) is an American business executive, serving as executive chairman of IBM. She previously served as chairman, president and CEO of IBM, becoming the first woman to head the company. Prior to becoming president and CEO in January 2012, she first joined IBM as a systems engineer in 1981 and subsequently headed global sales, marketing, and strategy. While general manager of IBM's global services division, in 2002 she helped negotiate IBM's purchase of PricewaterhouseCoopers IT consulting business, becoming known for her work integrating the two companies. Read more on Wikipedia