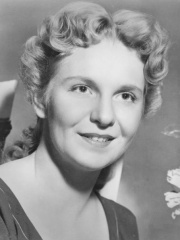 Geraldine Sue Page (November 22, 1924 – June 13, 1987) was an American actress. She earned acclaim for her work on Broadway as well as in major Hollywood films and television productions, garnering an Academy Award (from eight nominations), two Primetime Emmy Awards, two Golden Globes, a BAFTA Award, and four nominations for the Tony Award. A native of Kirksville, Missouri, Page studied at the Art Institute of Chicago and with Uta Hagen and Lee Strasberg in New York City before being cast in her first credited part in the Western film Hondo (1953), which earned her her first Academy Award nomination for Best Supporting Actress. Read more on Wikipedia

Since 2007, the English Wikipedia page of Geraldine Page has received more than 1,959,143 page views. Her biography is available in 49 different languages on Wikipedia making her the 1,312th most popular actor.